What is the purpose of the LESS lib-css mixin?

The .lib-css() mixin is used heavily in Magento 2 LESS files. However its purpose is not apparent, and the mixin definitions don't provide any helpful documentation:

I could see why you would want to use the mixin to add vendor prefixes to bleeding edge CSS properties (although there are few properties where that is necessary any more), but the reason for outputting normal CSS properties using this mixin is not clear. Can anyone shed light on this?

The only uses I can see are the prefixes and removing previously declared rules:

Removing previously declared rules instead of unsetting them

If it was only for one element it would be easier to write box-shadow: none;. But if this is on say 20 elements, it will be quicker to remove them all like so:

This has the added benefit of using @variable: none as it reduces lines of code, instead of adding more.

So compare these two methods: 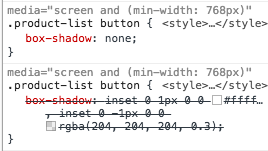 There is no output, the rules aren't processed

This does seem like a good idea but the use cases seem pretty small. I'll more likely just use it for the prefixes. It would be much more useful if @variable: false could be set locally, for example only within one div, unfortunately I couldn't get this working.

I've noticed some variables are set to false by default, such as ones in lib/web/css/source/lib/variables/_buttons.less, I presume this is so they aren't outputted until required. Also a good idea.

The .lib-css() mixin is used to set any css property if there is a value passed to it by a variable. (e.g.)

If the variable is set to false, the .lib-css() mixin will add nothing to the code.

also you can find all less help under

Not the answer you're looking for? Browse other questions tagged magento2 frontend less-css or ask your own question.

2
Magento 2 CSS .less files with @variables
0
Using Theme Lib Css / Source In Modules
1
::after behaviour with lib-css
8
Grunt compile of LESS fails with Error compiling lib/web/css/docs/source/docs.less
2
How to hide these 2 element in css / less?
0
Magento 2 Component less/css editing best practices
0
Magento 2 - How to override LESS code from _extends.less?
0
Magento 2 - When to use the parameter `@_prefix: 1` when calling mixin .lib-css()?
0
How do I override a value from a magento 2 lib LESS mixin?