I've downloaded magento ver 1.9.2.0 (latest one) from the official website magentocommerce.com/download and installed it using the standard steps. But, now the css is broken and I'm getting a plain text file. Attaching the screenshot. 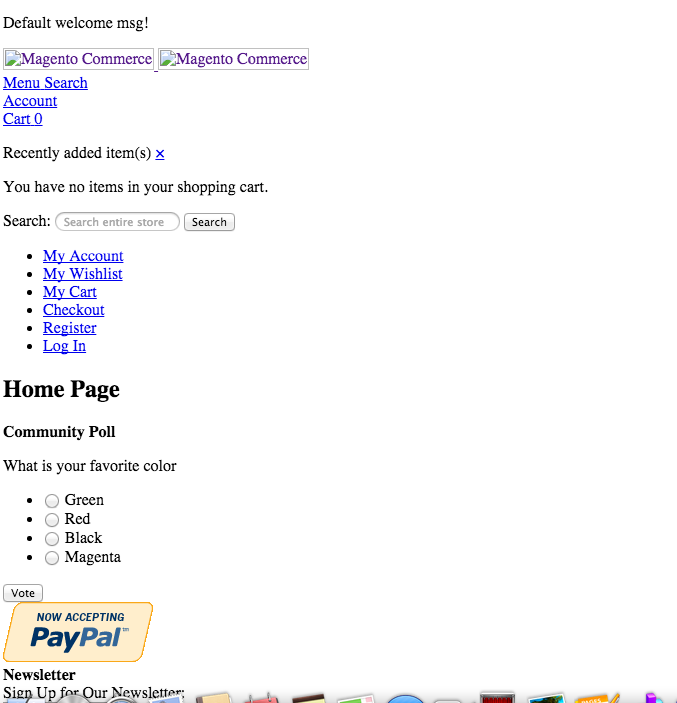 I checked few more similar answers but nothing worked out so far. Please see if someone can help.

Reading your question there are 2 things that come to mind, one of which happened to me today. Magento uses a full path URL to call upon CSS and JS files and it is not uncommon that it results into problems when installing Magento or moving it to another server for example.

I've once also encountered problems with the Fooman Speedster extension that actually creates a new folder to put a merged CSS file into. Moving your site breaks just about all your CSS and JS. Make sure it is turned of though I guess you're not working with it. Might help someone else...

I know you have have changed permissions on media already but the thing that I see commonly cause this is when css merging is turned on but Magento cannot write the media/css directory to cache the merged css. Another sign of this if you look at the markup the css will have a strange path, if I remember correctly it is something like /path/to/magento/media/styles.css.

Maybe just to be 100% sure this isn't the problem, make sure the media/css directory exists, if it doesn't make it. Also change it to the same user that your server is running as and make it writable.

If that doesn't work, can you post here the requests that the browser makes to get the CSS files using the browser's developer tools? Or do a View Source on the site and post some of the <link rel="stylesheet" type="text/css" href="the interesting bit here" /> from head.

What does your System > Configuration > General > Design look like? What is your package? Does that package have a "Default" theme? Is there anything in the Theme drop down? If you've declared a package and no Default floder CSS is there it will do this. If you've declared a package and any theme without a default folder and no named theme it will do this.

Not the answer you're looking for? Browse other questions tagged magento-1.9 css installation js-css magento-1.9.2.0 or ask your own question.

0
Magento sample data installation help
53
To use or not to use Magento connect...that is the question

30
Magento CSS and JavaScript not loading due to using file system path
0
Fresh install of Magento 1.9.2.3 has broken CSS? It doesn't look right
1
Magento base url empty
0
Magento Redirect Loop
0
No url is working after shifting magento 1.9
0
CSS and JS files for external theme not working in magento
0
Magento 2 CSS and Javascipt Not Loading
0
Magento server under maintenance after install the extension
1
Fresh Install, Admin Panel 404
0
Magento 2 - CSS not working properly after installation on MacOS