People who code: we want your input. Take the Survey

Magento2 : How can i scroll up to first input error validation message on checkout

I saw some simillar questions, but they wanted to remove this feature. They suggested to comment some code in MAGENTO_ROOT/vendor/magento/magento2-base/lib/web/mage/validation.js file

the part with animate, but actually in my vendor file this code was not there. So i added in my file since I want this feature. But nothing happens, when continue button on checkout is pressed and I have errors in form, the body doesn't scroll to the invalid input. On desktop it's ok, but on mobile, the user might never see the error.

I've also tried to put in my JavaScript file, some custom code, some jquery, when the button is clicked. I thought initial that it doesn't work because the button is already having the onclick event from magento files, from knockout. But i think that my jquery is not working because the element are not there, and the functions is triggered before the html elements load in dom. 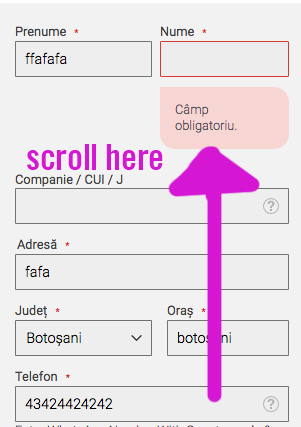 Not the answer you're looking for? Browse other questions tagged magento2 checkout javascript knockoutjs or ask your own question.

0
Rerference error: $j is not defined in optcheckout_rwd.js - Checkout as guest button not working - Magento 1.9
0
How to find what js is applying?
0
magento2 jquery element.click is not working
0
Add animation to product tabs (or any jquery widget)
5
Magento 2 : How can I upload files of dynamically added file input fields in the admin
1
how to remove shipping cost from magento2 checkout summery
4
add custom js to the certain input element on the checkout page