Preface: I have read through as many posts as I can find about this issue, but I have tried all solutions suggested already.

The Issue Using a quick docker setup to get a local instance of Magento 2 up for contributing development. I used this dockerize module for convenience. I have the site up and running, but all static content is throwing 404. The homepage pulls up, and all content including the media are loaded. But none of the static content (js/css) are resolving.

I did some debugging in the Nginx config file by adding cookies in each of the location blocks. The strange thing is the /static/ block never seems to be executed. The cookie being added in the first line of this block never gets added to any static content responses. I also tried throwing some debugging into pub/static.php and it doesn't appear to ever be executed.

I understand this has to be an environmental config issue, but I am out of ideas on what to try. I have completely wiped my setup and started over multiple times, but my result is always the same.

Below are some screenshots from my testing. What's interesting is all CSS requests show as (canceled) status, but all JS show as 404. 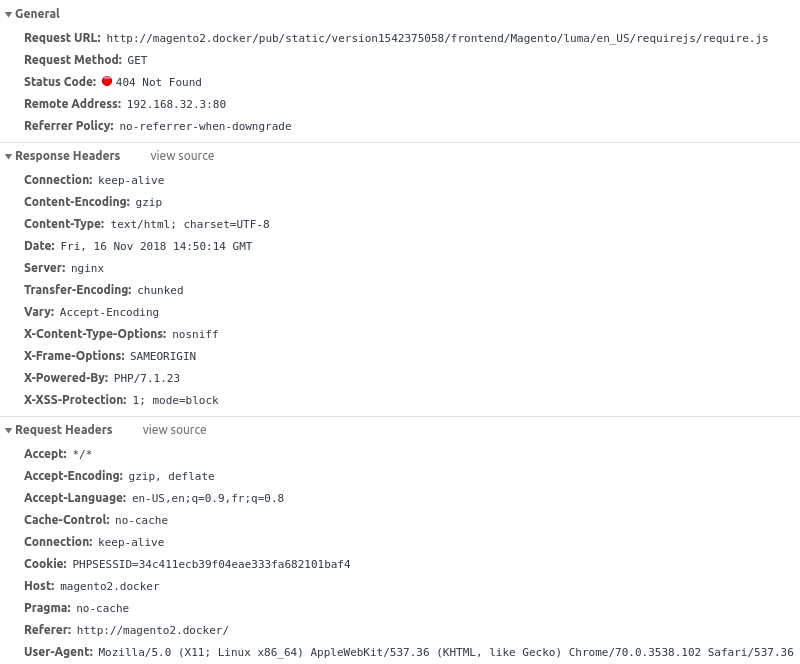 To clarify, my official question here is for any recommendations of what might cause the static content to 404, and if anyone has any ideas to try to resolve the issue that I haven't already tried. Thank you for your time and any assistance.

My Nginx config file, which is taken directly from the linked docker setup, but I stripped out all Magento stuff and instead included the sample file.

After some more testing I found that if I manually do the rewrite from /pub/static/ to /static.php?resource=$1 it results in a successful call. For example, if I try to go to magento2.docker/pub/static/frontend/Magento/luma/en_US/css/styles-m.css I get a 404. But if I to go magento2.docker/static.php?resource=frontend%2FMagento%2Fluma%2Fen_US%2Fcss%2Fstyles-m.css I get the CSS file successfully. This means the /static/ location in the Nginx config file isn't getting properly triggered I think. I just can't figure out why.

I was able to get the assets to load by moving the location /static/ blocks in nginx.conf.sample to be inside the location /pub/ block as follows. This is just a temporary fix though, because it means the alias in pub isn't working properly I think. Anyone have suggestions on why that might be the case?

I followed the above (moving the /static block inside the /pub block) but it didn't work for me. In the end, what did the trick was then adding in a new block for /static as follows :

Note that is subtly different to the similar rewrite at the end of your code in Update 3.

In your nginx.conf.sample file change from $MAGE_ROOT/pub to $MAGE_ROOT . I hope it will fix your issue.

Not the answer you're looking for? Browse other questions tagged magento2 nginx static-content docker magento2.3 or ask your own question.