Magento offers different releases under download section such as 2.0.x and 2.1.x or 2.2.x.

What is actually mean by Magento 2, ver 2.x or 2.1.x or 2.2.x? Is this mean that there are 4 types of Magento releases M1, M2, M21 and M22 LOL, Why they are offering such types of version? Because normally single version is publicly offered and rest are considered as outdated but they are offering 3 types of versions at the same time under recent release. Moreover If we observe version 2.2.1 then 2.0.17 and 2.1.10 must be considered outdated but it looks like it is not. On this point I would like to share recent experience, my client complained me that I am not using recent Magento ver (2.0.10) because recent is 2.1.2 (at that time) and to be frank I was already confused with this.

What is the preferred ver to be used?

You can find a list of all the changes for each release on the developer documentation site.

You can always check the Magento 2 GitHub repository if you want more information or if you want to know what improvements or fixes are worked on.

I encourage you to always start with the latest stable version if possible and update to the newest version as often as possible.

Each release contains multiple security fixes and enhanced performances (or at least they should).

If you don't know how versions work or what they mean read : Semantic Versioning 2.0.0

The Magento 2 community is very active, new code and pull-requests are made every day.

To get information on a specific release just use the left navigation and make sure to check the proper version : 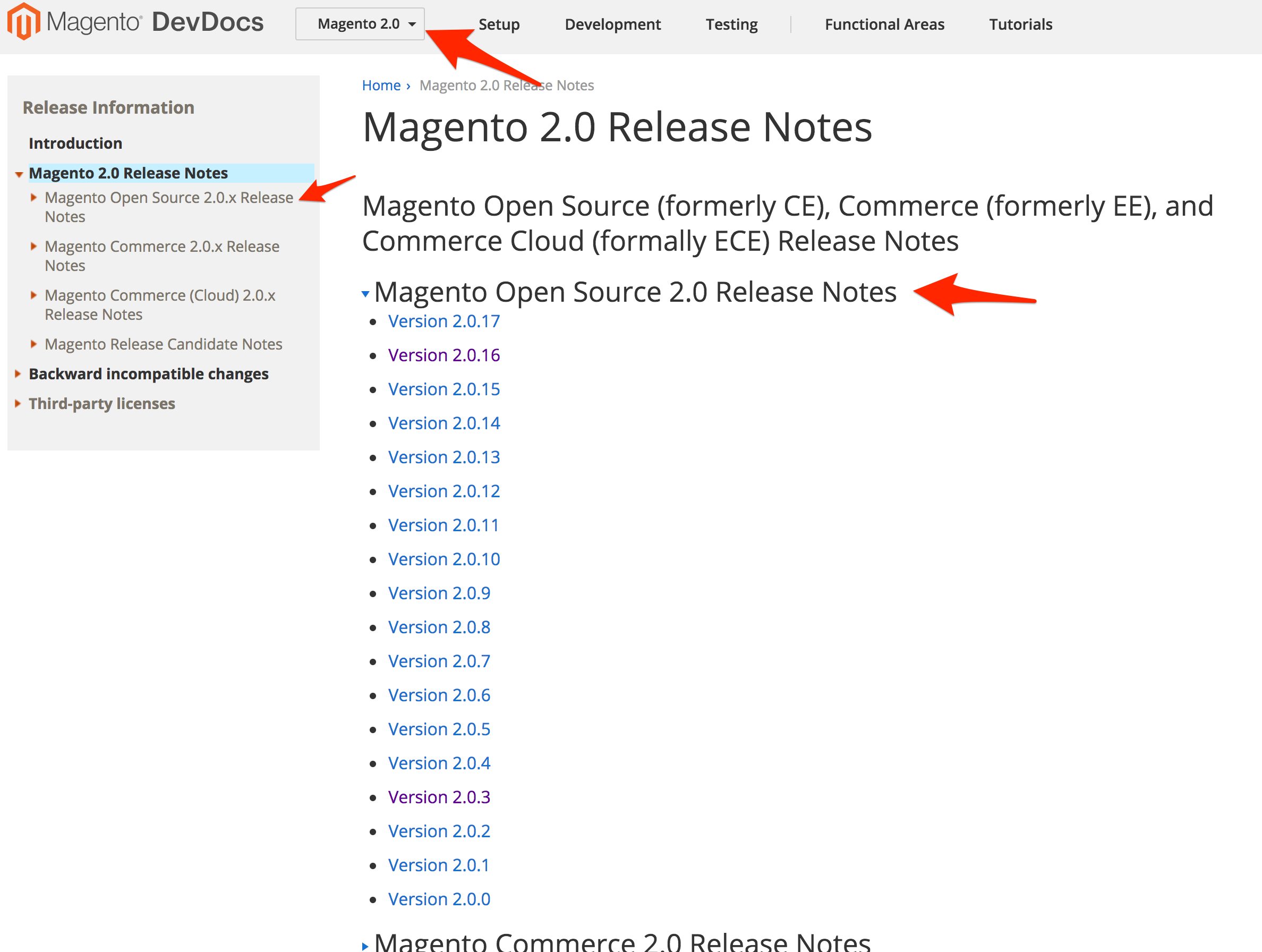 To see the major changes in each version make sure to check the Highlights of each release.

Magento tries following SemVer policy. It allows to add new features and doesn't break existing functionality. This policy similar, for example, to PHP releases, each new release has some improvements or features and old releases has only bug fixes.

According to your question:

Sometimes impossible to fix a bug in the backward compatible way, that's why some fixes are present in 2.2.x or 2.1.x releases but are absent in 2.0.x. Another case, some bug from a customer or merchant perspective is not implemented from Magento side, that's why such improvement might be only in 2.2.x but not it 2.1.x and older.

Not the answer you're looking for? Browse other questions tagged magento2 magento-2.1 magento-2.0 or ask your own question.

2
Magento 2: making a module using UI component compatible both 2.0 and 2.1?
15
Magento 2: Difference between Models and Data Models
2
Difference between magento 2.1 and 2.2
4
Porting 2.1 extensions to 2.0
1
Magento 2.2 product collection doesn't return out of stock products
0
Magento 2.1 Discontinue Date
0
How can I configure my computer for checking My Magento Extension is Compatible with multiple Magento versions with php versions?
0
composer show magento/product-community-edition --all it show all version or your satup version?
0
Magento 2 - How to upgrade to magento 2.4.0?
1
How to check all Magento 2 versions available to install via Composer?