The website is throwing a bunch of javascript errors. They are the kind that look like jquery was not loaded properly. These errors don't happen 100% of the time though. I don't understand requirejs enough to understand what is going on. 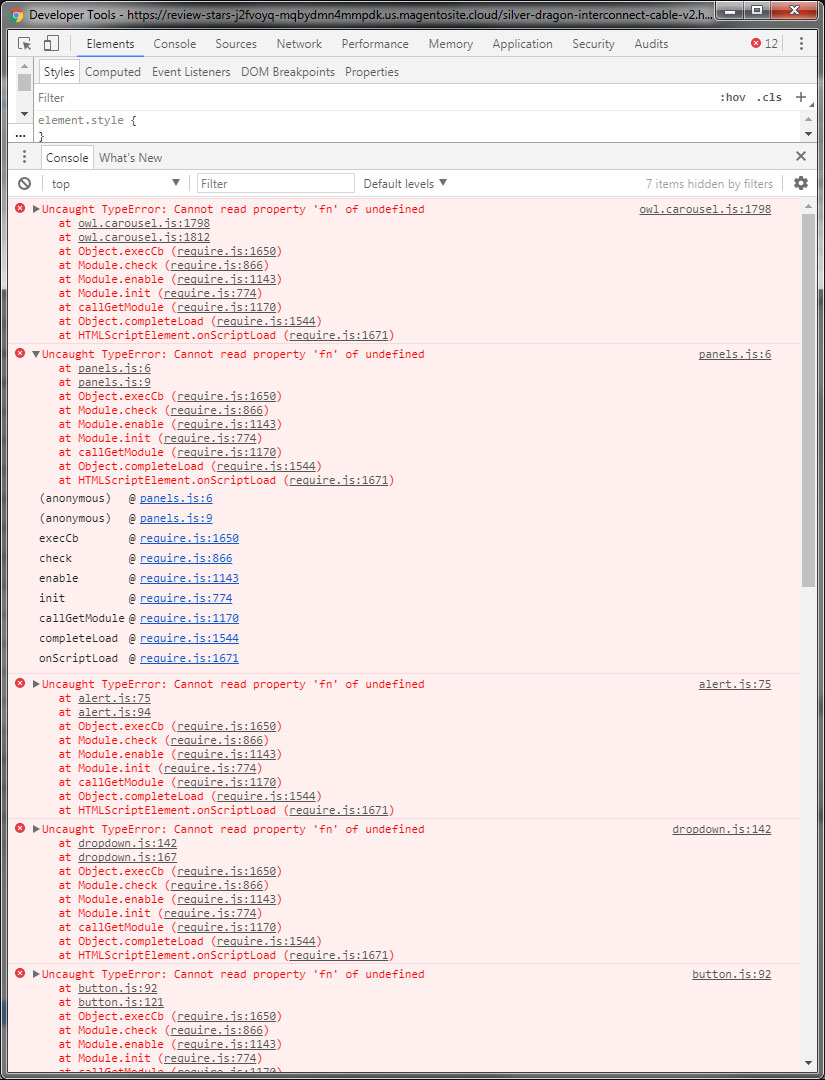 This is running Magento 2 and the Pearl theme by WeltPixel.

Not sure what else would be useful, should I post the source code of the page?

This error is returned if you do not have permissions and/or static content is not generated.

You have to run the commands

and make sure the permissions (777) are ok on /pub/static/frontend, the command of permission is:

Yesterday was released a new release of Pearl theme, you can update the theme.

To anyone finding this in the future. My issue was around having a ShopperApproved integration.

I was able to narrow this down by disabling all extensions and then enabling them one at a time until the issue returned. After this I was able to say for certain that it was the ShopperApproved integration.

I then went into that extension and commented out all JS code that was added to the page. I then uncommented it file by file to see which was causing the issue.

In my case there were three different places that were an issue, but they all involved using script to add an external JS file to the HTML head. That JS file loaded jQuery if it wasn't found.

My solution was to wrap that code into the windows onload event so it would fire after all other JS. There is probably a better solution, but this worked. Since the issue was specific to my code base I will refrain from adding specific code here.

This can happen when the $ variable is not set to be jQuery but some other framework. You could try why you enter $ in your console.

Apparently, when you refresh the page, one of the two wins and gets assigned to the $ variable randomly.

You could fix this in the code by putting:

around the code that needs to be executed. This makes sure $ refers to jQuery.

Not the answer you're looking for? Browse other questions tagged magento2 javascript or ask your own question.

24
Magento 2: How/Where is the `getTemplate` Knockout Function Bound?
0
Validate Frontend Form in Magento
4
jQuery event listeners working most of the time but not sometimes?
7
Magento 2 add custom validation rule
2
Magento 2. Describe different types and uses of JavaScript modules. Which JavaScript modules are suited for which tasks?
2
Page loads take around 10 minutes due to requirejs
1
How to Include a Third-Party Javascript in Magento 2 Using requirejs