Can anyone explain what are the differences between two?

I have searched a lot but didn't get any clarity, anyone here who is using can explain, please.

Think of it like model years and generations on a car. Generally, car companies will release a new car, then make little successive tweaks and improvements to it over the next 5-8 years, and then they'll make a completely new generation for the next 5-8 years. For instance, the Honda Civic: They started the 8th generation in 2005, then the 9th generation in 2011, and the 10th in 2016. It's still basically the same car each time, it has all the same characteristics and it appeals to the same market, but it gets better and more refined each time.

Model year changes are usually pretty small, they don't change the basic look, and aftermarket parts are basically interchangeable for all the years within a generation. But going from one generation to the next is a completely different car platform--new frame, new engine, new styling, new interior.

Magento is kind of like that. Magento 1.x was a generation, and 1.0-1.9 were 'model year' changes, little successive improvements and feature additions. But 1.9 is still fundamentally the same platform that was there in 1.0, all the way back in 2008, and that means it's showing its age. Magento 2.x is a new generation, a complete rebuild of all the insides and outsides, and it's the one that's going to be actively maintained going forward. It still has basically the same features, and does the same things (lets you sell products), but it does it better, and it's a more modern platform designed for the next decade, not the last one.

There are some specific differences, but the gist of it is Magento 2 is newer, more modern, better designed.

Please find below differences for it. 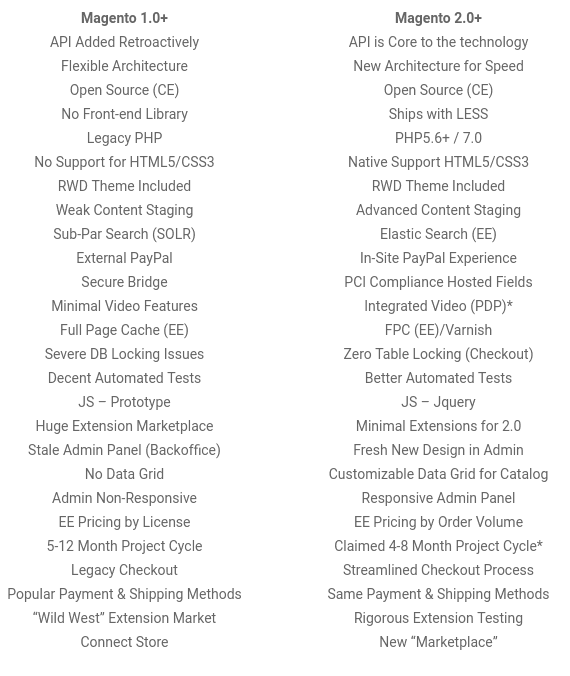 Magento 2 is better than Magento 1 in many aspects. At the end of 2015, Magento had launched its new version Magento 2 (https://magento.com/tech-resources/download?icid=topnav). Magento 2 has many advancement in terms of UI, features and functionalities. It is fast and based on latest PHP7 (http://php.net/manual/en/migration70.new-features.php). Since its launch, store owners using Magento 1 are in a doubt. Should they upgrade Magento 1 to Magento 2 or not? To overcome this doubt below I have mentioned few points every eCommerce store owner should consider -

Why Magento 2 is better than Magento 1 for ecommerce business

Not the answer you're looking for? Browse other questions tagged magento-1.9 magento2 or ask your own question.